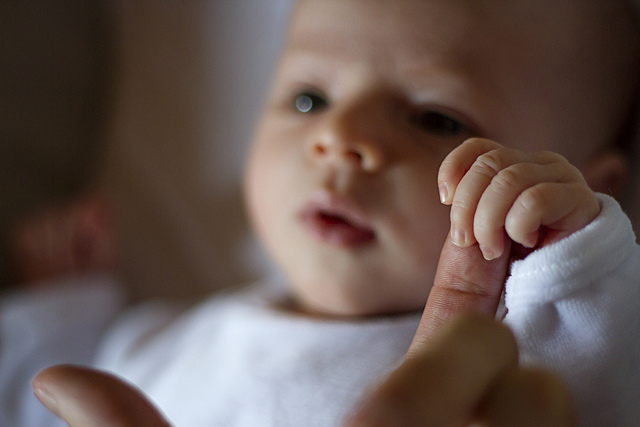 An astute observation by an Osteopathy Student in 1899 led to the development over three decades of a new and exciting treatment which can be applied to people of all ages.

William Garner Sutherland noted that bones at the side of the skull resembled the gills of a fish. That simple observation suggested motion. Eventually Sutherland discovered the intrinsic motion (CRI or cranio-rhythmic impulse) in not only the skull. He learned that motion is the basis for diagnosing and treating the cause of many problems.

Birth is a process designed by nature to help the infant come into the noisy, bright big scary world from the cosy environment of the uterus in which the baby is completely dependent on the mother.

When the birth process goes well the large amounts of adrenaline and oxytocin stimulate the process of expelling the baby and mother and child bonding. Labour also helps to mould the baby’s cranium and stimulate the CRI.

If the birth process goes too fast or too slowly, the baby in the breech position or requires some medical intervention abnormal forces are applied to the baby and a record of this may be retained the tissues of the cranium or the rest of the body.

The Cranial Osteopath feels this movement in the head and other parts of the body. Where the motion is not expressed normally, the body cannot function properly. This disturbance is the basis for a number of common symptoms in babies such as, colic, glue-ear, sleep disturbances, developmental immaturity and dental problems among others.

These motion patterns are often created during the birth process due to the large forces placed on the baby as he/she is born. This is more likely to occur if the birth has been assisted by forceps or ventouse or if the presentation is abnormal. Other factors in pregnancy can also cause these disturbances.

During infancy and childhood illness and accidents can also disturb the cranial balance.

We must not forget the mother too! It is quite remarkable how an 8lb baby can pass through a female pelvis. This process may have a profound effect on the mothers structure and can lead to pain and discomfort in the short or long term, as can epidurals.

I strongly recommend that both mother and baby be checked by a Cranial Osteopath as soon as is convenient after the birth. At this stage problems are easier to treat. Waiting until problems become obvious will mean longer and more difficult treatment. Craniosacral therapists sometimes give treatment in hospital.

Author: Jonathan Lawrence (reproduced here with kind permission from Jonathan)
For further information you can contact Jonathan Lawrence who practices in South Molton on 01769 574833, or the General Osteopathic Council on 020 7357 6655.
photo credit: Matthieu Luna via photopin cc